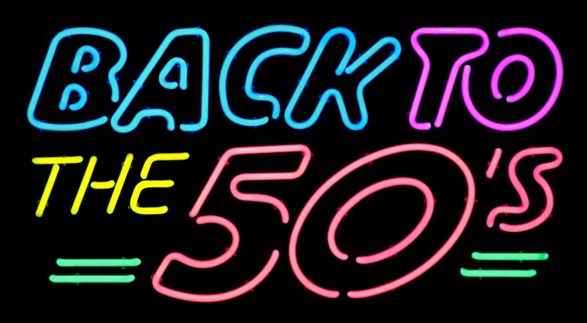 Ah! The dog days of summer! The August heat makes people just want to laze around and soak up the sun a little more while they still can before returning from vacations, returning to school, and returning to winter (sad face - there were no emojis in the 50's.) The summer also makes it hard to create the abundance of new customs that you all are accustomed to!

Nat King Cole sang about these days in his 1963 hit "Those Lazy-Hazy-Crazy Days of Summer" back when you'd go to soda shops and the drive-in where you'd see "more kissing in the cars than on the screen". And on the beach you'd see the "girls in their bikinis, as cute as ever, but they never get them wet"

Well, unfortunately we don't have Nat King Cole's catchy song for you you this week, but we have three others that capture the feeling of summer and that innocent time that were the Fifties.

So grab your Grandpa and stay indoors and play these songs! Honestly, you don't need your grandpa to enjoy these songs. They are THAT good!

First up we have a classic song authored by IMMCTNTJK, and a Multi-track at that!

Since these are the "Lazy Days of Summer" I will just copy a little of what the Wikipedia page says about the song: Come Go With Me was a #4 hit for The Del-Vikings in 1957 and was featured in several movies such as American Graffiti, Diner, Stand By Me, Joe Versus the Volcano and Set It Up. Rolling Stone magazine ranked the song #449 on its list of the 500 Greatest Songs of All-Time.

Well, it is pretty catchy.  Here's what IMMCTNTJK had to say: "I don't want to be known as the guy who authored Green Day and that one song from the 50s"

Next Up we have two more great ones from The Everly Brothers, created by yours truly (ws54)

Bird Dog was a #1 hit and Gold Record for the Everly Brothers in August 1958. The audio used is a carefully constructed mix of three different recordings since no single recording contained all of the features I was looking for, making this version unique, but still true to the original. For players, Everly Brothers songs are primarily for Singers and Guitarists and features great 2-part harmonies throughout the song.

Fantastic! Thanks for sharing these

2018 - "Showdown" with Spindoctor - Vote for your favourites!

2020 - Some Old Guys - Classic Rock & Heavy Metal customs blasted from the past.

Wonderful! Thank you so much for this one. There would never be too many oldies in the database.

Tight little pack.  Thank you, both ws54 and IMMCTNTJK!