17 replies to this topic

Authoring custom venues is a tedious process. Even if you use the method to separate lighting and camera you still end up with a mess of events that is hard to edit and debug. This is where venuegen comes in.

This is a tool I made earlier this year that I had been passing around privately among authors. Back then it was just a measly single Python script. Now, after some major upgrades, I am ready to release it publicly here on the forum.

Venuegen allows you to create a custom venue by placing MIDI notes on two tracks, one for camera and one for lighting/post-procs. The program will then generate the text events for you. This allows for a much more maintainable venue making process, as you can now see when every event is called more clearly and editing is just shifting MIDI notes.

It's a Python script using REAPER's API just like CAT. The setup is the same as setting up that tool, and it has a GUI you run from within REAPER.

Below is an example of the lighting I made for Algorithm. All the text events in the image were generated from the notes in the piano roll (click to see full size). 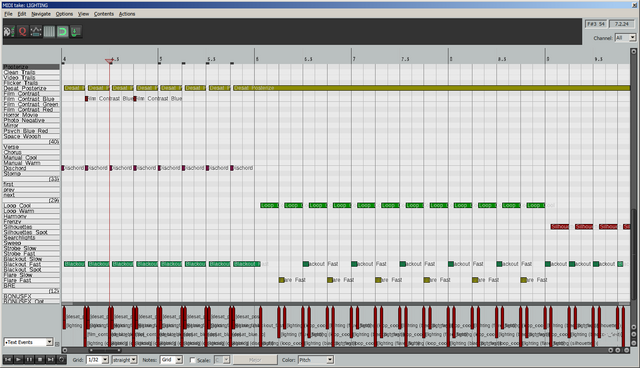 Other features of venuegen include:Download, and a comprehensive guide, are available in the link below (Clone or download).

And here is a list of all Reaper projects I have done, which right now is just venuegen and a basic tool to transfer Pro Guitar hand positions to left-hand animations.
https://github.com/k...r/ReaperRBTools

Thanks for this release kueller! Venuegen is an extremely helpful tool when making a custom venue and anyone who wants to do one should use it.

I really, really love this concept. Can't wait to give it a try.

An incredible undertaking kueller. Thank you very much!

I've yet to tackle making a venue yet, but I think I will give this a look, thank you!

Noticed the link I posted had no download link since it wasn't the master directory. I've linked to my general RB tools repository, which includes venuegen, and also a tool to convert pro-guitar hand positions to left hand animations. A lot more niche but maybe someone has good use for it.

Genius idea!  If I ever get back to authoring I'll definitely be trying it.

Recently pulled out RB3 for the first time in 1.5 years, now sorting through old projects that could use this sort of thing. I always preferred the RBN1 venue style with notes instead of text events.

(Guess I'll have to brave ye olde environmental configuration gauntlet, though, and try to get the right versions of Python and Reaper playing nicely together...)

Very cool!  I was eventually going to make something like this, but life gets in the way.  Glad I'm not the only one that finds RBN2 venue authoring tedious.

Nice goodness, these really help's me to generate a good feel in game, thanks to you my friend

Oof. I was so excited to try this out, installed Python, went to all the trouble of placing the MIDI notes as described, installed an older version of Python because Reaper didn't like the latest, went to fire up VenueGen, aaaand...

This is apparently something missing from my own install of Python, but not something I can find a way to install because I'm not on Linux?? 🤦‍♀️ What do?

Installed 2.7 and Reaper doesn't recognize it. Tried manually pointing to it and everything.

It may not have been included in the install or something.

If you can get CAT running you can get venuegen running. The CAT thread may have some more help and similar problem reports.

I figured out what I did wrong -- installed the 64-bit version of Reaper =w=; Decided I'd try the 32-bit version just now and it worked without a hitch.

Been trying to get venue gen to work, and it doesn't seem to want to generate anything. Doesn't even name the notes as the appropriate lighting/camera cues in the LIGHTING or CAMERA tracks in the Piano Roll. Am I doing something wrong? I installed it correctly, and it identifyed python, and haven't had any issues with CAT.

Been trying to get venue gen to work, and it doesn't seem to want to generate anything. Doesn't even name the notes as the appropriate lighting/camera cues in the LIGHTING or CAMERA tracks in the Piano Roll. Am I doing something wrong? I installed it correctly, and it identifyed python, and haven't had any issues with CAT.

Wait, I is dumb. I need notes in the piano roll for it to generate the events. But looks like I need to put in the note names myself?

Wait, I is dumb. I need notes in the piano roll for it to generate the events. But looks like I need to put in the note names myself?


Venuegen includes the note names inside of a archive file, want you need is...

- Double-Click on VENUE track
- At the bottom tab of a MIDI, Right-Click again
- Highlight "File"
- Highlight "...Load note names"
- Find "Venuegen" where you stored
- Select your Prior note name .txt