A Quick Guide to Reduction Rules


10 replies to this topic

Just starting out on trying to do reductions to your customs, or wanting to spice up your CAT reductions? Here are some quick guidelines

5-Lane Keys
Keys is mostly similar to G/B reductions, with some exceptions:

Pro Keys
PK is reduced like 5-Lane is, with some extra rules:

EASY:
Easy is a odd case, where for each section you have to choose between two sets of charting styles:

Mixing between these two styles in a song is often key to making a fun Easy chart, though if doing that be sure to do it rarely (for example, having verses as kick/snare but choruses as snare/kit)

Be aware that tempos above 160bpm and tempos below 80bpm can and probably should bend the reduction rules in a few ways. For example, you might want to have bigger gaps between the end of the sustain tail and the next note on faster tempos, have bursts of three 16ths on slower tempos on Guitar, etc.

Be also sure to read up on the Authoring Docs and ask questions if unsure about something: http://pksage.com/rb...title=Main_Page

If anybody notices something I have missed or have worded wrong, let me know and I will fix it

Thanks for the tips!

Some additions, clarifications, and changes:

That they do, however I always got flack for doing that for Medium on RBN and it seems to work quite well with a 3/16th gap, so it has sort of become a "thing" even if not technically "by the docs" still

That they do, however I always got flack for doing that for Medium on RBN and it seems to work quite well with a 3/16th gap, so it has sort of become a "thing" even if not technically "by the docs" still

Lemme toss in something more on this. Way I've always done it is (and the way I remember the docs saying for the longest time is) that a 3/16 gap is standard for G/B, and 1/4 is for 5-lane keys. This is how I've authored almost all of my RBN/C3 songs with extremely rare exceptions (like tempo considerations: I believe I left less space in the two Genesis 5-lane keys charts I did because the BPMs were so low).

I'm currently working on recovering as many CTA songs as possible that never made it to the RBN store. And maybe get more songs from the artists that made those songs.

I may also have some other surprises to bust out here. Most of what I release will have full multitracks.

I'm excited to be here.

I can't believe that I've only just found this thread after all my time here!

This is so helpful - I wish it had been stickied so I could have found it sooner!

Can we sticky it?

I have a couple of questions about this that have yet to be answered by even the documentation.

1. What exactly counts as a "quick" Green - Orange? No notes in between? Anytime within a quarter note? I'm sure it depends on tempo, but I'd assume an average tempo.

2. Unlike Pro Drums, which seem to be more an extension of the Expert drums, almost like an Expert+, the x2 Bass Pedal version of a song is an entirely separate chart. Would that be an Expert exclusive, or would the tips for kick reducing vary depending on which version it was? Basically, is x2 Bass Pedal also just Expert+, or would the lower difficulties assume a double kick as well?

EDIT: So I thought that the documentation made a remark about how #1 was unclear. Apparently I was mistaken.

Why is it that I can never get the motivation to do vocal charts?

When I've had spare time (not often) I've been fleshing out the existing documentation on my local wordpress server (for fun).

Regarding #1 - see screenshot  below based on documentation and advice from other authors on Discord. 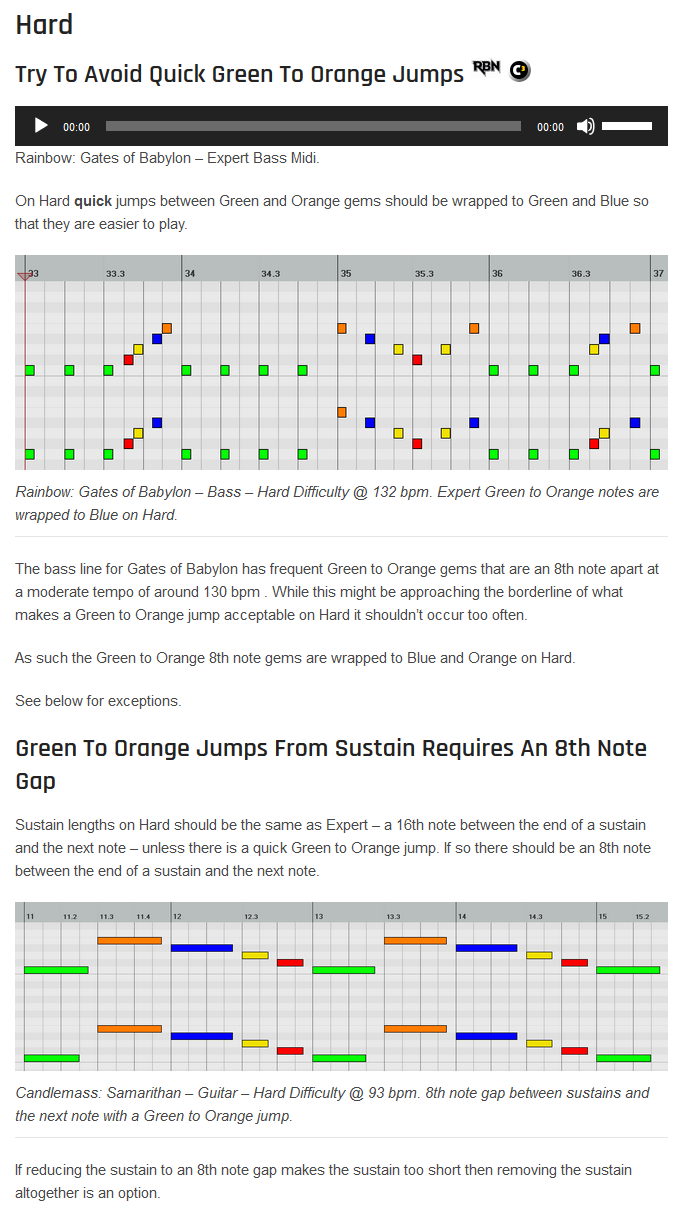 I haven't done a 2x chart yet so I'll let someone else answer that.

Thank you so much! This is incredibly helpful. You said something about a Discord. I may have to do some sleuthing to see what that's about. Anyway, I can't thank you enough for that; it always drove me crazy that there wasn't any clarification on that.

EDIT: Never mind, I'm an idiot, you just said that they were on Discord in general.


Why is it that I can never get the motivation to do vocal charts?

You're welcome, glad that helped you out!